Flutter tutorial: How I learned to use this framework 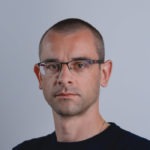 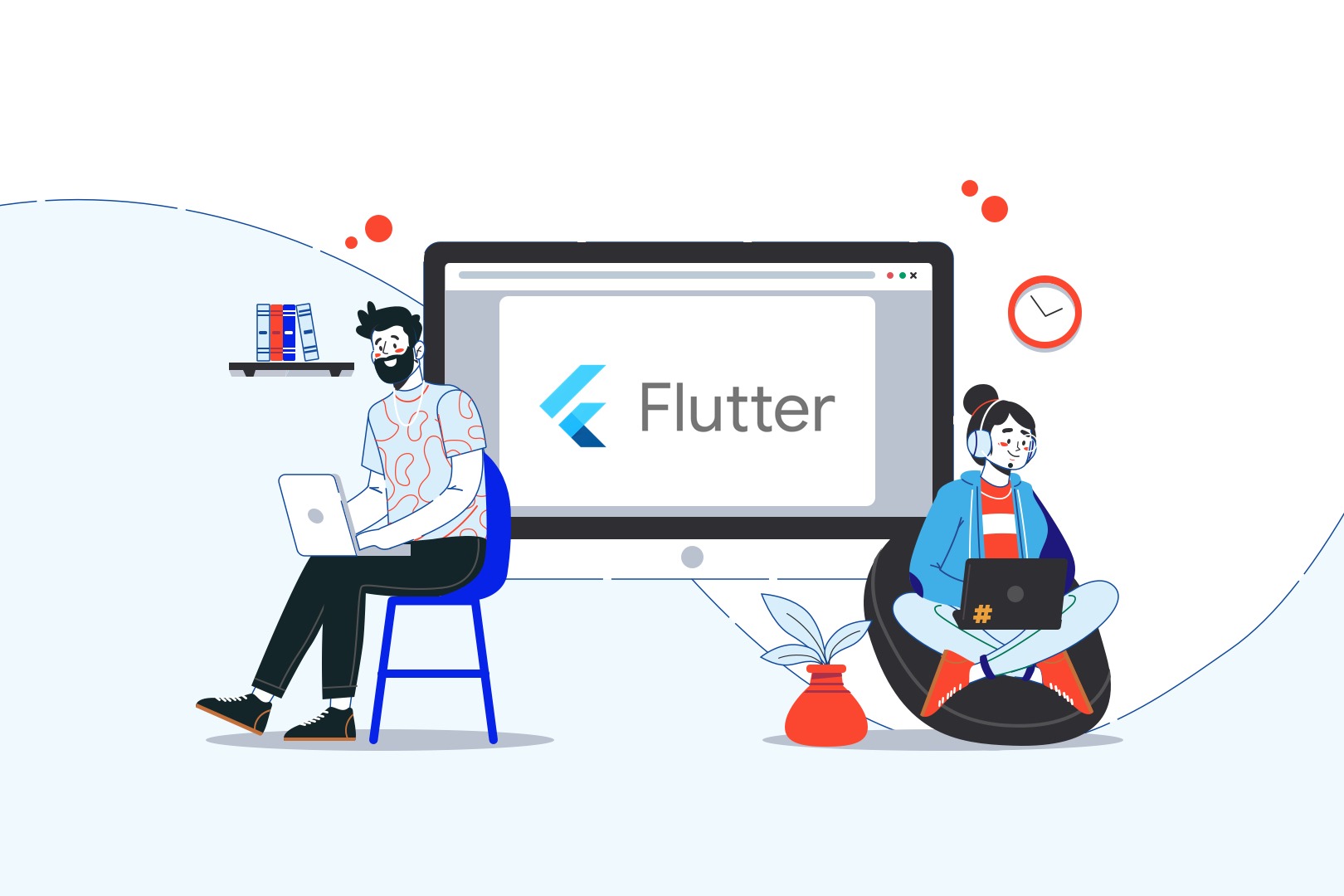 If you’ve ever thought about developing one mobile app which will work on the most popular mobile operating systems – Android and iOS, most probably you considered using React Native. It’s one of the most common solutions for hybrid app development. Created by Facebook, battle-tested by dozens of mobile developers since 2015. But have you heard about Google’s Flutter? If you didn’t – let me introduce you to a straightforward Flutter tutorial based on my own experience.

So, what is Flutter? How long does it take to learn Flutter?

In short – Flutter is an open-source UI software development kit created by Google and its community. You can use it to develop applications for Android, iOS, or macOS with Windows and Linux compatibility on the horizon. And how long does it take to learn Flutter? Well, it depends – as it always happens with learning new things. In my case, it took just a few days. Talking about my experience, I decided to present you with a peculiar Flutter tutorial by showing you how I learned to use this framework.

Before I step into the tutorial part, let’s bring some important facts about Google’s Flutter.

How to install the Flutter environment?

It depends on the operating system you use. I recommend checking out the official Flutter install website. It contains a complete guide on how to set up this framework. Please note that it needs some effort on your end. But hey! You have to do this only once. Don’t give up. 💪

Many IDEs support Flutter and Dart. Being an Android developer myself, I’d rather recommend Android Studio or IntelliJ. You can download and install it from the official Android website. Once you have it, you should install the Flutter plugin. It will require you to install the Dart plugin too. The process is shown on the short video below.

Setting up a sandbox for a Flutter project

The best method to learn a new technology is to try some code snippets from its documentation or tutorials. But first you need to set up your own sandbox project. It’s very simple. On the “Welcome to Android Studio” screen, you should select “Start a new Flutter project” and go through the following steps.

So, now you have established a Flutter environment with a sandbox project. It contains a sample application that counts button clicks. This playground project is a place where you spend the most time with copying code snippets and doing some modifications. Simply joggling with your own ideas. Below, I will show you how to do it.

Let’s say that you want to learn how Container widget works. First, make sure to create a package tree. Then, select “New” from the context menu and choose “Package” (as presented on the screenshot below). 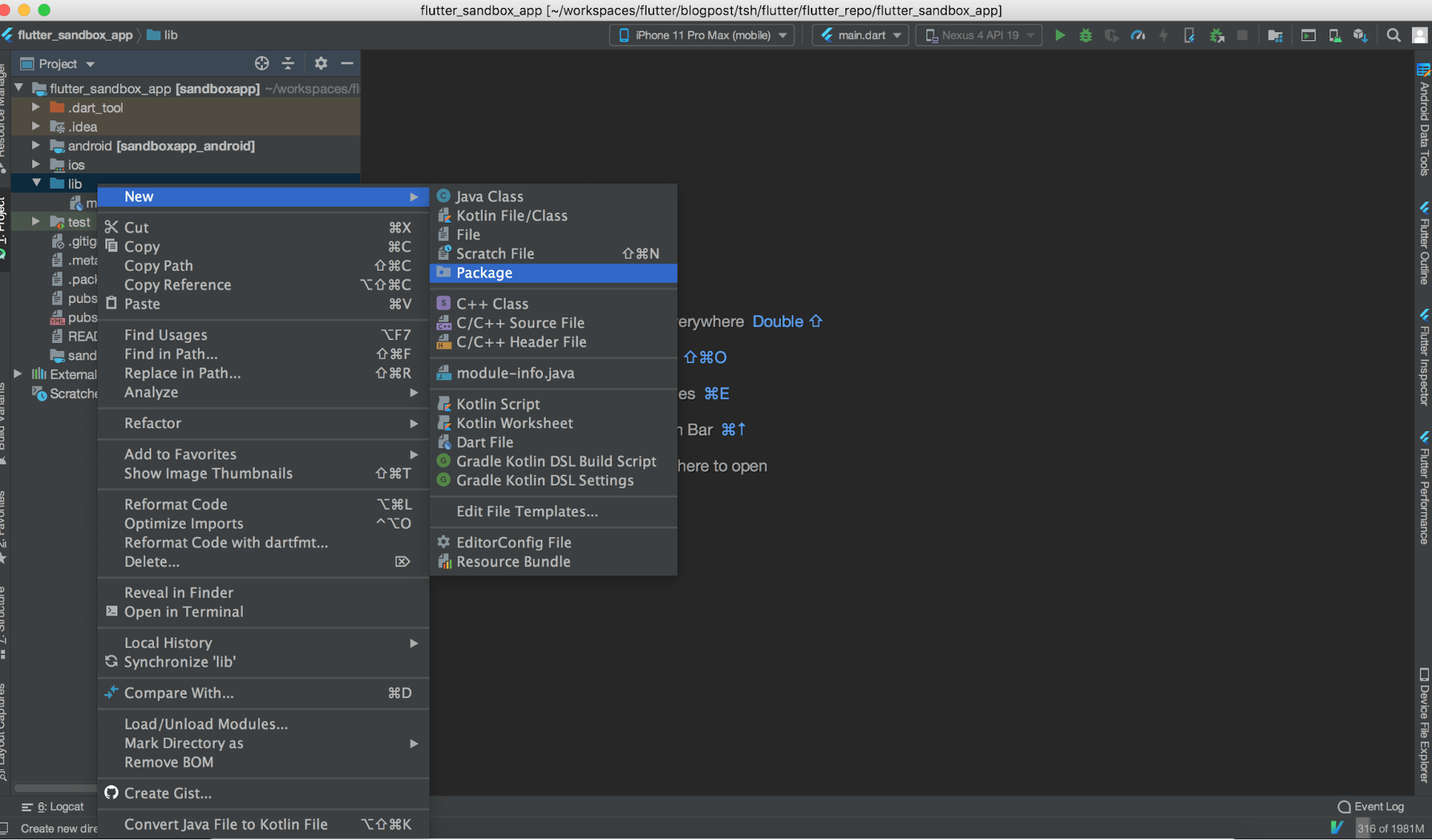 After that, create my_container.dart file by selecting “Dart File” from the context menu as presented below. 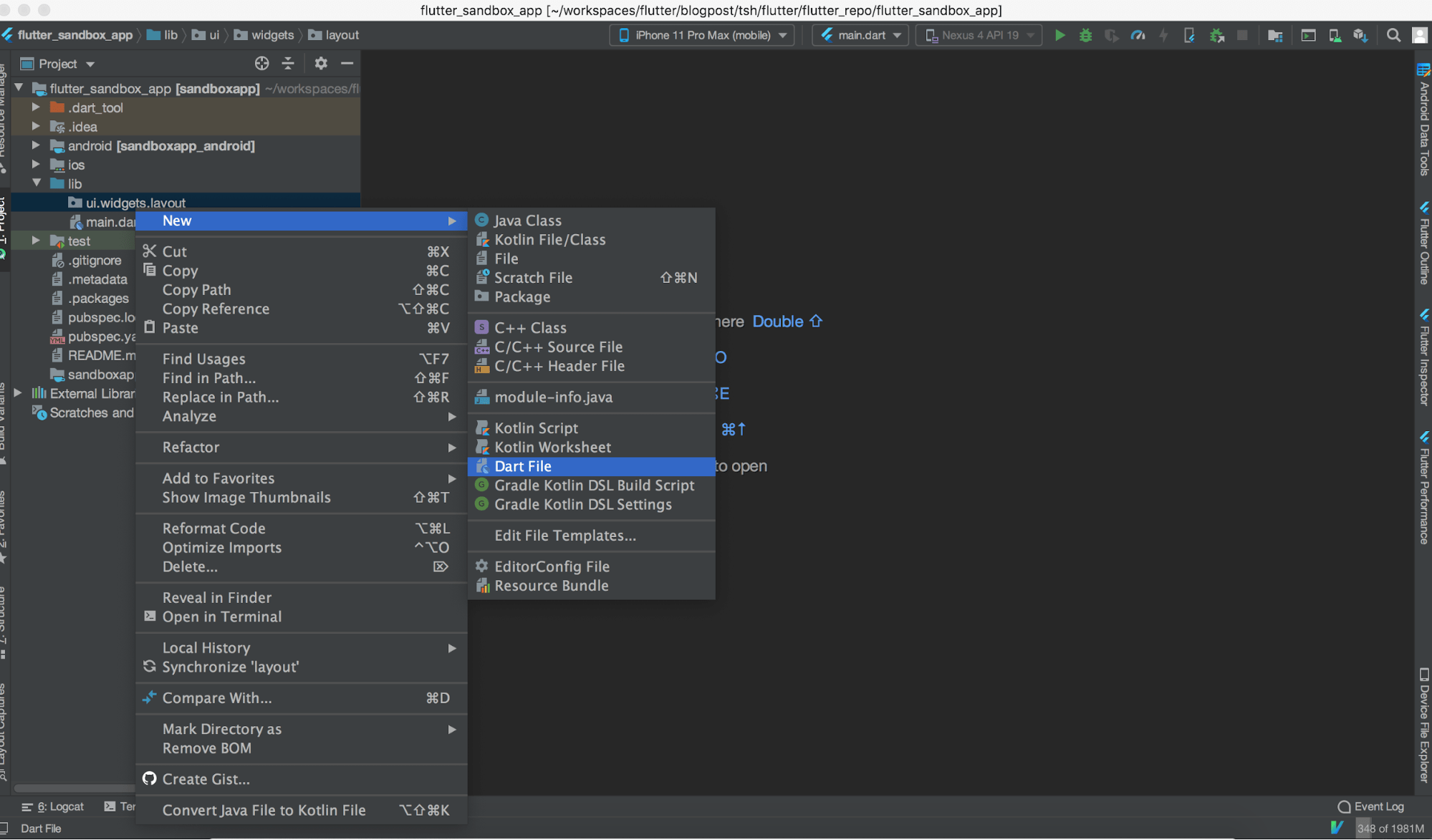 Now, you can create a MyContainer stateless widget. In Android Studio, you can use a handy abbreviation. Start typing stless, then just click enter.

Now, you can copy-paste a code snippet from the Container class documentation example into the build method. Resolve imports again.

Then, you should add the main method (as it’s presented below).

Now, your code should look like in the example below.

All right. You are pretty close to run your first Flutter code! To do it, you need to add a new configuration. 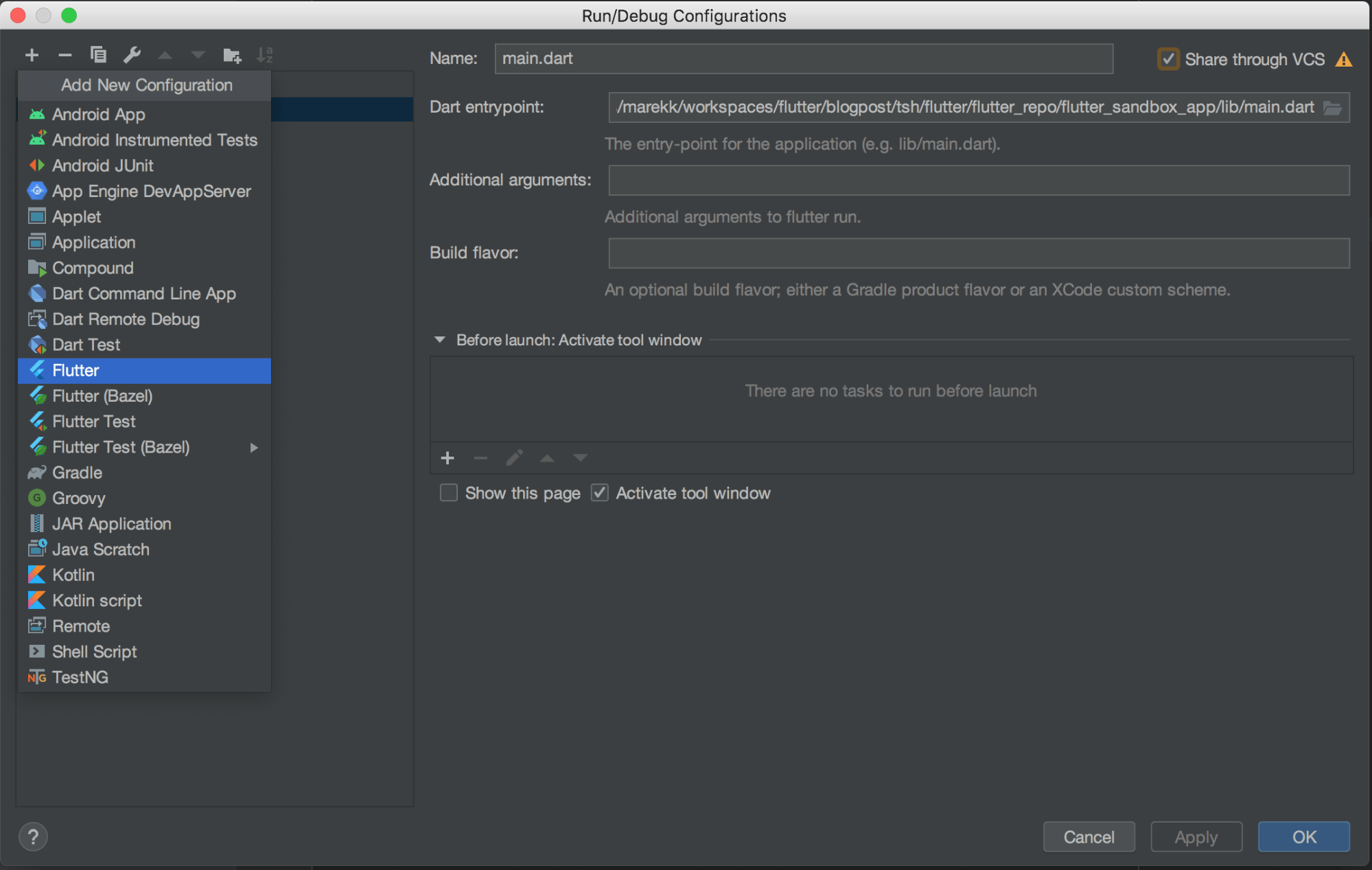 Now, you need to add the configuration name (e.g. the same as the Dart Filename) and add the Dart entrypoint – my_container.dart file. 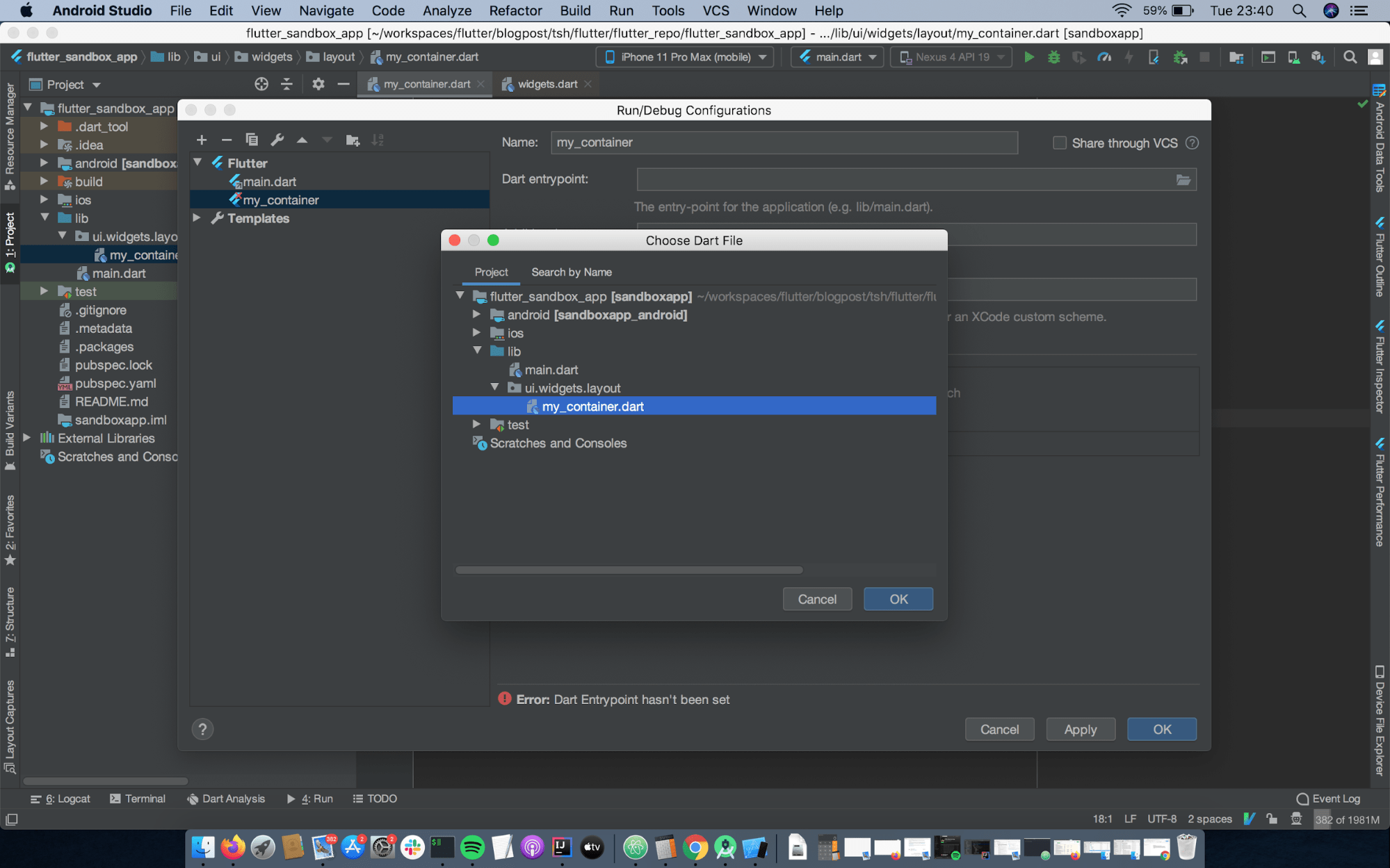 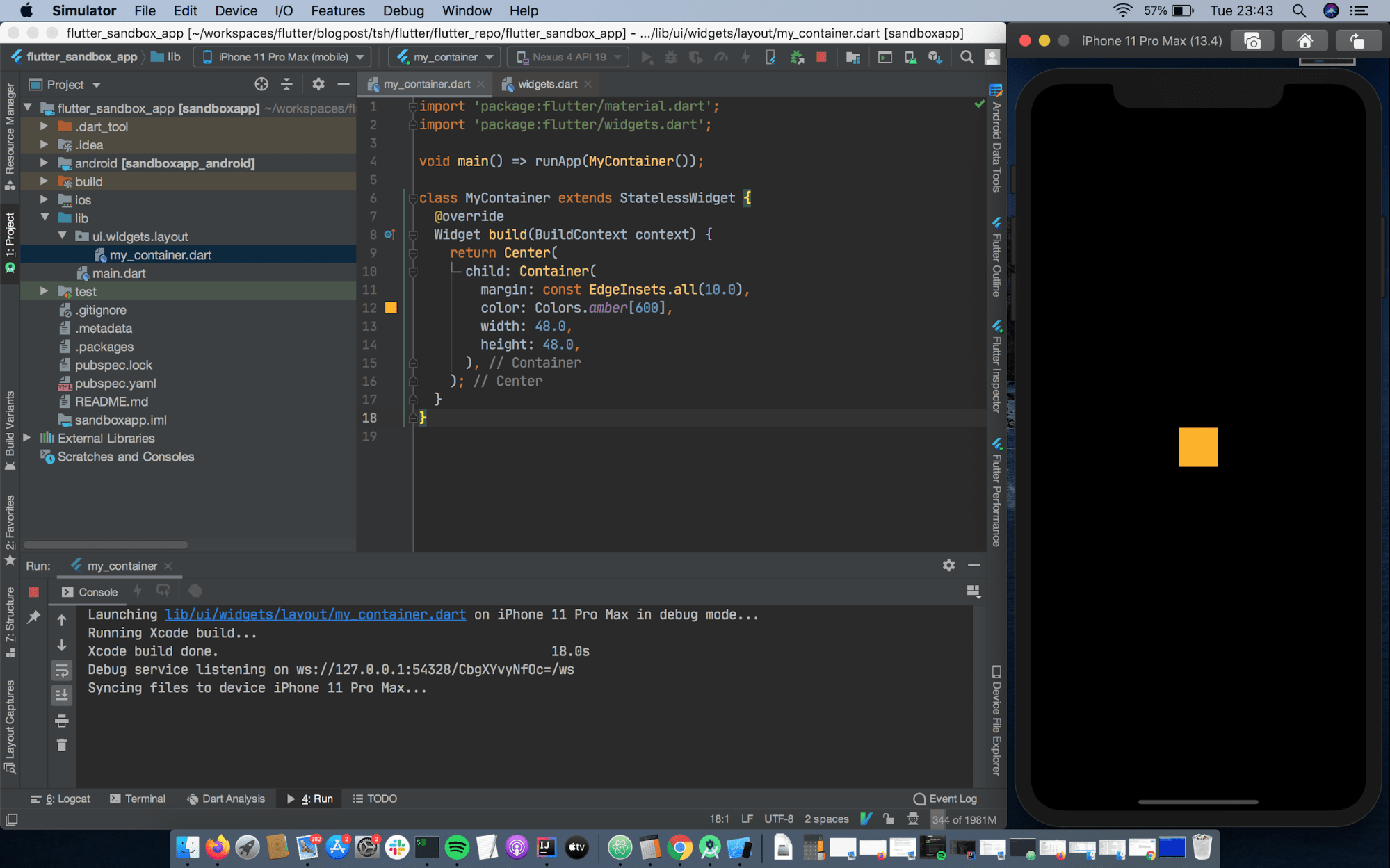 As you can see, this simple app doesn’t look like a normal app. It has no AppBar or title. Even the background is black.

My suggestion would be to create the class BaseAppWidget. It contains all you need to set up a basic app quickly.

Let’s create a package ui.common, then base_app.dart. After that, create a BaseAppWidget stateless widget with three constructor parameters: title, message and child.

Below, you can see how the whole file looks.

Now, you can use the widget you created in my_container.dart. You should wrap MyContainer class with BaseAppWidget as presented below.

So, your code should look like in the example below.

Finally, run it on the iOS simulator again. 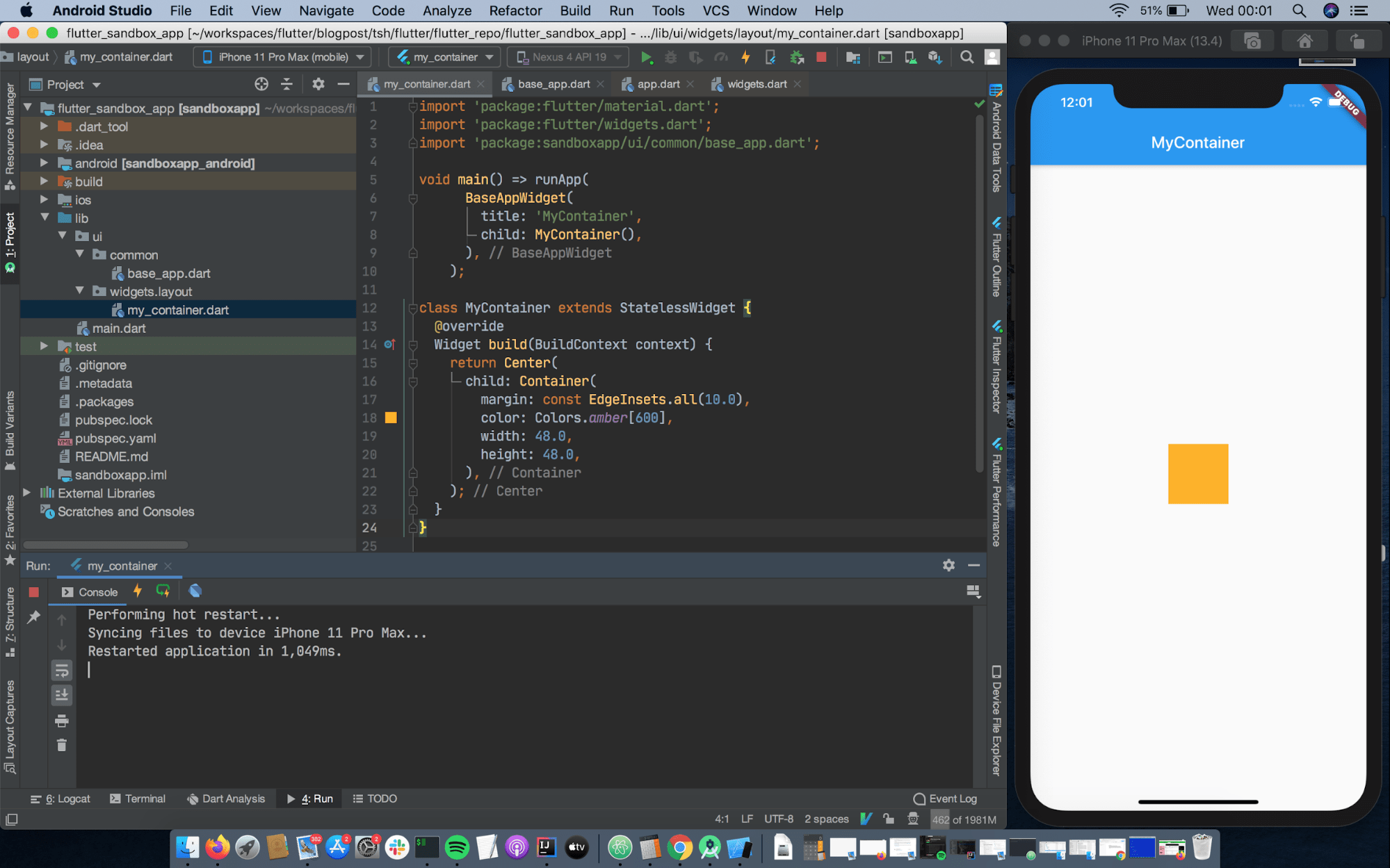 This time, the app looks like a normal app, right? 🙂

Summing up, Flutter is a powerful UI toolkit powered by Dart – the language with a friendly syntax. You can create one code base and run it on the most popular mobile operating systems: Android and iOS. But first, you need to do some exercise. You should practice improving your skills. My goal for this Flutter tutorial was to show you how I learned using this framework.

Now, you know how to configure Android Studio. I presented you with my way of getting to know Flutter. You can now create your own playground projects, creating a file with a code snippet you want to examine. Then you can add the main method, create a launch configuration and run it on the chosen device or emulator. Good luck and have fun! 🙂

Software developer with over 10 years of experience in different technologies. Android and hybrid mobile solutions enthusiast. He spends his free time playing with LEGO bricks with his kids.