The fall of Flash is (almost) upon us: Adobe Flash alternative & advice 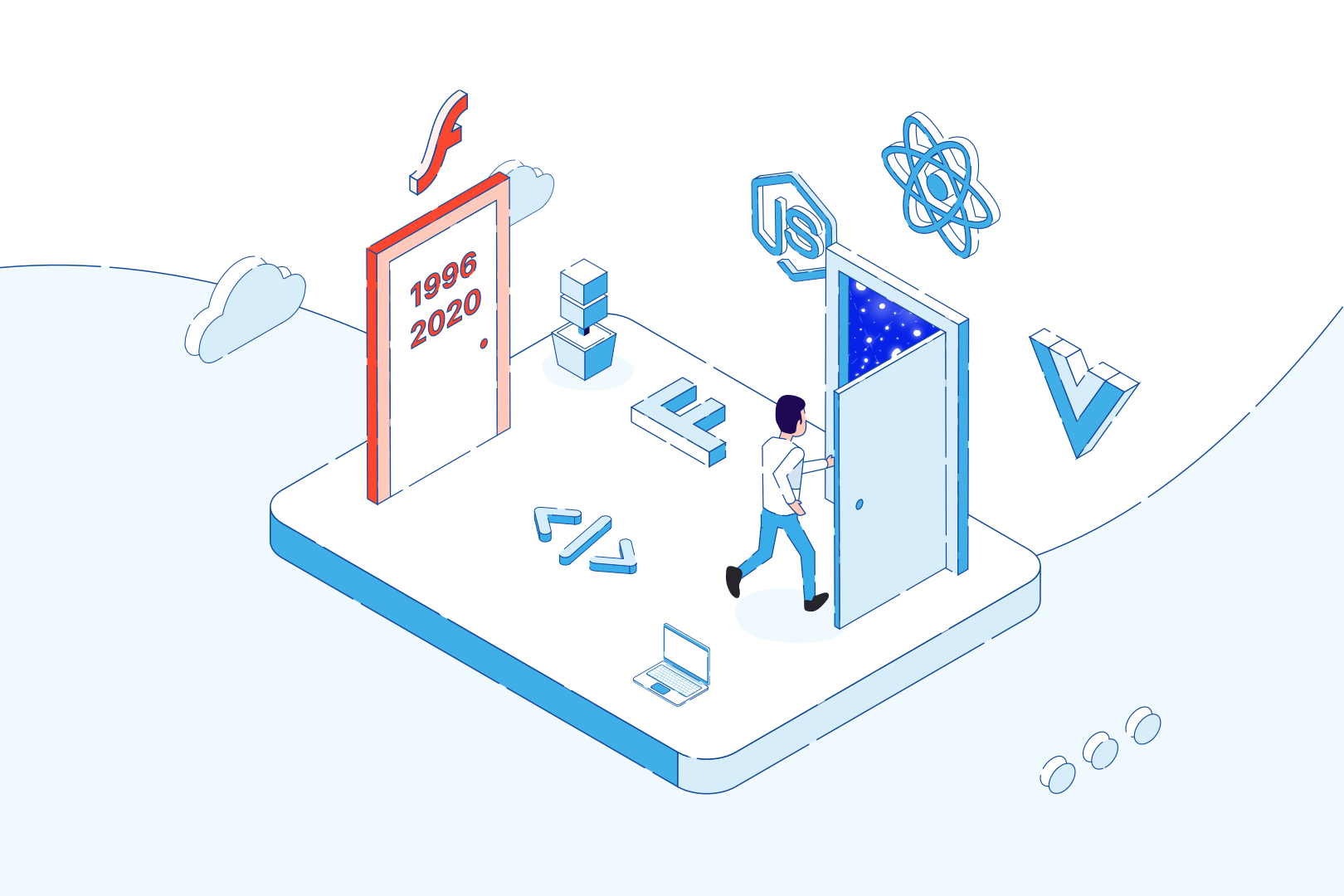 Once a ubiquitous and irreplaceable part of web and desktop apps, Flash is gradually fading into complete obscurity. However, with the announcement that Adobe ends support for Flash in December 2020, the process of getting rid of it needs to speed up. Meanwhile, there are still quite a lot of websites and apps that keep relying on it. In today’s article, we’re talking about the consequences of not replacing Flash before that date and possible Adobe Flash alternatives in various scenarios.

Did you hear that Adobe will cease updating and distributing Flash at the end of the year 2020? If your website or app still happens to use it, you should work towards replacing it as soon as possible. It’s no longer optional – it’s a must. Why? Let’s find out, but first let’s take a step back to the times when Flash was the pillar of a large chunk of web and desktop applications.

Rise and fall of Flash

Did you know that only a couple years later, back in 2014, you would hardly ever go 24 hours without loading a page containing Flash? It was everywhere in the web browser, back when Internet Explorer was the most popular web browser. According to Google’s security specialist Parisa Tabriz, 80% of all web users would do it at least once a day.

But at that time, Flash, the once go-to solution for developing highly interactive websites and applications, was already past its prime – for many reasons which we’re going to highlight in the next section.

In 2010, Steve Jobs published his “Thoughts on Flash” open letter, in which he explained the reasons why Apple decided against supporting Flash on their new line of devices such as iPhones, iPods and iPads. Among many other reasons, he pointed out that even if they did support it, most Flash-based websites would still have to be rewritten in order to support touch-based devices.

In 2018, only 8% of web users continued to come across Flash on the web. And yet, it’s still 8 percent too many. In early 2019, Mozilla disabled Flash by default in the Firefox browser amid security concerns.

However, it’s just a prelude to Adobe’s long-anticipated end-of-life for Flash, which will take full effect by the end of 2020.

Why is Flash not suitable for the modern digital era?

There are many good reasons why the use of Flash in the development of both web and desktop apps has been in continuous decline in the past decade and users luckily don’t see it so often in the web browser anymore. Let’s take a closer look at the most important reasons.

Most businesses today pay a lot of attention to Search Engine Optimization in order to bring more traffic from search engines such as Google or Bing. And there is hardly a choice in web development that is more detrimental and counterproductive to this goal than Flash.

SEO’s essence is content and links – two things Flash is very bad at. Most of written content is not indexable for site crawlers and is not divided between separate, interlinked and searchable pages. Most user activity and outbound links cannot be tracked with tools such as Google Analytics. That alone is enough to make it impossible for Flash-based content to rank well in SERPs.

But if you need more, consider this: Google, the dominant search engine, has already announced that it would stop indexing Flash altogether. RIP SEO.

With every year, users are more and more demanding when it comes to the performance of websites and apps. 53% of mobile users will leave a website if it doesn’t load within 3 seconds. Being relatively heavy, Flash-based websites load slowly and don’t meet the requirements of the modern web.

The previously mentioned letter from Steve Jobs should have made it clear, but it’s worth it to stress that today neither iOS nor Android support Flash. While it’s technically possible to create mobile apps in Flash and package them as iOS/Android apps with Adobe AIR, performance-wise it’s best to develop them with Apple’s/Android’s native technologies in the first place.

We have already pointed out that Flash doesn’t work with touch screens and that its inability to identify clickable links hurts SEO. But what should concern you more than SEO is the fact that it all makes Flash very difficult to use for many users, especially visually-impaired ones (if you’d like to read more on this subject, check out our article on increasing the accessibility of your website). Flash-based websites are not easy to work with for screen readers. They also don’t support alternative text for images and those can be extremely helpful for visually-impaired users.

Over the years, Flash has been known for multiple bugs, many of them being security-related. As we said, it got to the point where one of the major browsers decided to disable it completely for security-related reasons. With end-of-life planned for the end of 2020, no more security updates will be made. That alone makes getting your website/app rid of Flash an absolute necessity.

By now, you definitely know that there is no future for Flash-based websites and apps. However, it doesn’t mean that replacing it will be a walk in the park. Most likely, you’ll have to rewrite your entire app from scratch (if it’s Flash-based, chances are it’s very old). Let’s take a look at a couple possible Flash alternatives.

The approach will be different depending on whether it is a desktop- or web-based application. And within each of these two contexts, there are still many possible approaches and each case needs to be analyzed separately.

Having said that, let’s consider a couple possible scenarios with some help from The Software House’s Head of Node.js, Adam Polak.

“Desktop apps have always been most associated with technologies such as Java, C# or C++. But when it comes to Flash, it may be easier to rewrite using something like the Electron library. Then, we can use any modern frontend framework to implement the UI (e.g. React or Angular), and create efficient backend with Node.js,” says Adam.

Electron is a library for the development of cross-platform desktop apps using modern and powerful JavaScript-based web technologies. If you want to upgrade your web platforms at the same time, it might be an extremely efficient and future-proof solution.

Replacing Flash on the web

Rewriting Flash in a website or a web app depends on many factors.

“If we are talking Flash games or animations, the best approach is to take advantage of HTML5/WebGL and rewrite it all to JavaScript.

“If what we have is a text-heavy web portal, it may be wise to move to one of the many popular CMSes, such as WordPress, or take advantage of one of the static site builder solutions like Gatsby (check out our series about JavaScript static site generators).

“If your Flash-based frontend is a single page application (SPA) and communicates with an API, the best approach is to rewrite it with a powerful JavaScript frontend framework (e.g React, Angular or Vue).

For a backend app, you can use just about any backend technology, such as PHP or Java. However, I strongly recommend the Node.js approach (check out our Node vs PHP comparison article). ActionScript, that is the language used by Flash apps, is very similar to JavaScript and TypeScript (ECMA-based languages used by Node.js). Therefore, the process of rewriting the app will be easier and more efficient. And the resulting app will adhere to all the requirements of the modern web,” recommends Adam.

By now you have probably started the process of getting rid of Flash in favor of other solutions.

If you haven’t already done so, this article should give you all the information you need to do so. Still feel free to contact us! We can also become the partner that will see the whole process to the end in your organizations. 👩🏼‍💻

Regardless of what approach you’re going to choose, you should act swiftly – not only is Flash harmful to your business in ways we described in this article, but it’s also harmful for your customers.

Use this opportunity to really reboot and improve your digital presence with modern quality software!