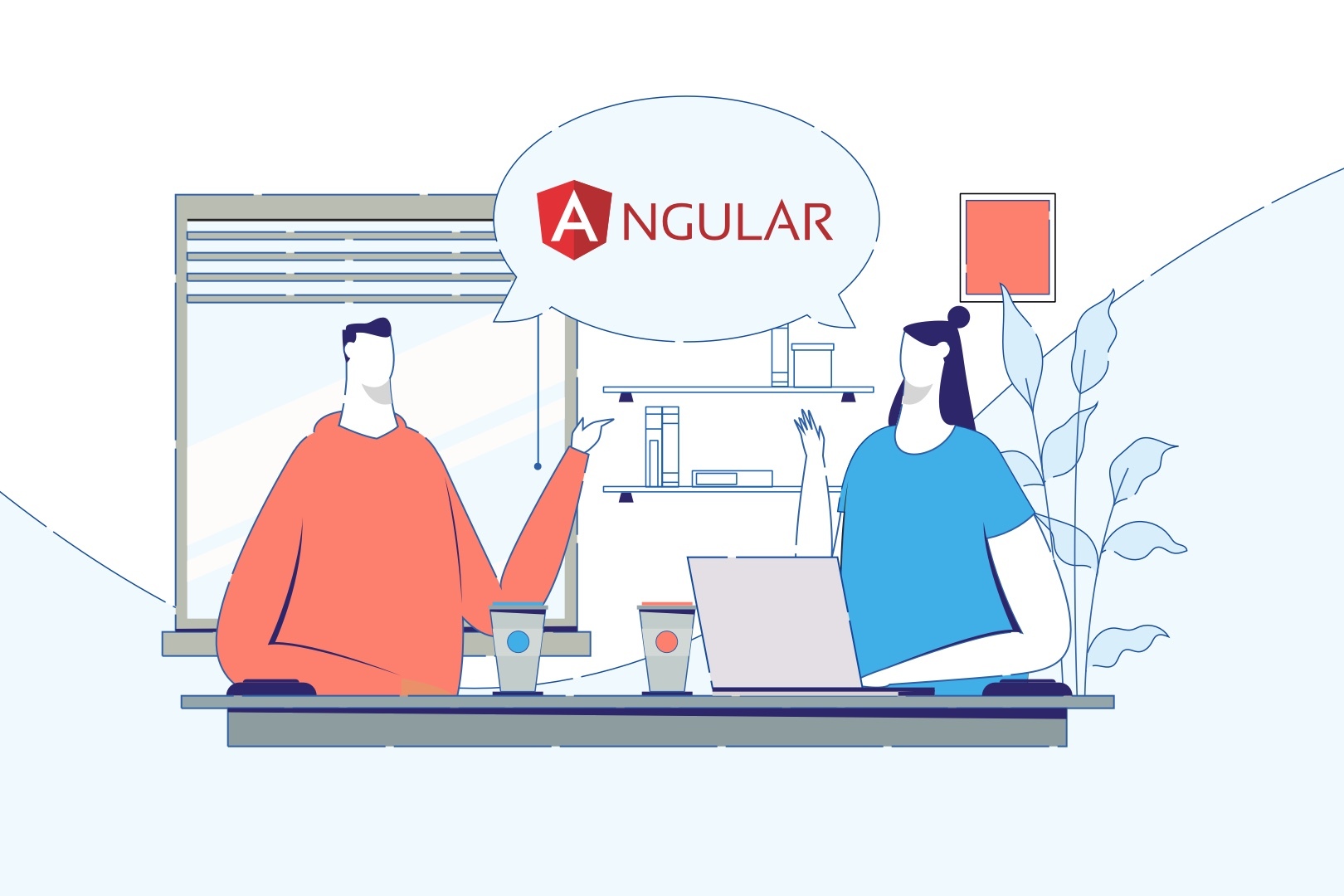 It’s been many years since the very first version of Angular hit the (digital) shelves. The framework’s popularity had its ups and downs but remains one of the most popular JavaScript frameworks in the world. Many companies favor angular for its potential to power large highly-scalable web applications. It’s open-source and has a huge community built around it. But the real challenge for them is to top Angular developers that can take advantage of all those benefits. So… how do you hire Angular developers without losing your mind?

As a software company strongly focused on JavaScript, Angular has always been a very important framework for The Software House. It powers many of the ambitious projects we have been a part of.

This gave us the ability to learn a lot about acquiring and retaining skilled software developers of various kinds. We talked about hiring Node, PHP and React developers in the past. Today, we’re going to tell you more about the state of the Angular job market in 2020 and how to find the best possible candidates.

Let’s get right to it!

When we go back to AngularJS, the Angular brand has been on the JS framework market for around 10 years. The unique, structured approach to building applications gained great popularity, but the emergence of other popular JS frameworks such as React and Vue prevented it from monopolizing the market.

However, it doesn’t mean that Angular is doing bad now. Quite the opposite – according to the Stack Overflow 2020 report, Angular (Angular 2+ and AngularJS combined) is the 3rd most popular web framework in the world, with as many as 26.5 percent of all respondents admitting to using it.

Angular is indeed popular (for web application or single page applications development among others) and Angular developers are still in great demand, but it is not always apparent at first glance, because Angular excels in specific kinds of projects. TSH’s frontend/Angular developer Kamil Raszyński believes that:

“Angular attracts a lot of people with Java and .NET background because of its structure and form. Compared to other frameworks, it is an all in one tool for conducting a web project. It makes it perfect for large and long-term projects. It’s less adequate for startups that strive to arrive at a working MVP as quickly as possible. Thanks to an extensive specification and standardization, Angular projects are easy to maintain for a larger group of developers.

What kind of Angular developer should you hire?

With a JavaScript framework as large and unique as Angular, it is more adamant than ever that you focus on the practical experience of your candidates that can quickly understand project requirements.

“Experience with Angular is vital. You should determine whether the candidate’s knowledge comes solely from books and tutorials, or is it something that evolved while working with the code,” says Kamil.

However, It doesn’t necessarily mean that the Angular experience needs to be a result of multiple projects. After all, it is not something that one should expect from a young JavaScript developer.

Less experienced Angular programmers can prove their good understanding of the principles behind Angular during a well-organized Angular developer interview:

“During the interview, I’d focus on problems typical for large projects rather than the kind of knowledge that can be learned by heart. Does the candidate understand the RxJs rule, or do they know how to test Angular apps?” believes Kamil.

Other than presenting the candidate with problems typical during actual Angular developments, it’s worth using screening tools to test their coding skills (more on that later).

In addition to pure development skills, assess the candidate’s soft skills to determine if they will make a productive member of your team.

Now you should have a pretty good idea of how to select and verify Angular developers. But before you can do it, you must find a sufficiently large pool of candidates to choose from. Where and how to look for these prospects? There are many ways to go about it, including inbound methods such as:

When you work on your website, using good content and methods such as SEO (more on that later), people are bound to visit it. There, they will find your career page. Make sure it is well-polished, has all the necessary information for the candidates and it’s easy to use.

There are a lot of job portals that allow you to increase your outreach with both free and paid job postings. Some of them include ZipRecruiter or Honeypot.

Online webinars are a great way to share knowledge and position yourself as an expert in a given area, which attracts talented developers. How about making an Angular-themed webinar? Check out online webinars organized by The Software House on our resources page.

Referral programs are a well-established way of increasing your talent pool. You can award people for referring candidates, but only when they actually land a job. It means that people will not bother recommending someone who is definitely not a good fit for your Angular job posting.

Are you active in social media? Do people that your company has been doing or is about to do some great things with Angular? Make sure they do by talking about and sharing great Angular-related content. Developers interested in your Angular positions may also check out your social media to learn more about the kind of things you do.

With SEO, you can create valuable web content which can bring an Angular programmer to your website from organic search results. This doesn’t just require an SEO expert, but most importantly, skilled content creators and developers willing to share their unique expertise.

Newsletters are yet another great way to attract people to your brand in the online world. Make sure the content is unique and useful so that Angular developers can actually get some value from it. Don’t overdo the visual aspect of a newsletter – the strength of a good newsletter lies in the content.

The web is not the only place where you can make the presence of your brand and its interest in Angular development known. Try outdoor advertising – a traditional method, which is not used that often by companies from industries with a strong online focus.

What about outbound methods? There are many ways to directly reach out to Angular developers without being intrusive or bothersome. These include:

Companies attend JavaScript, frontend, and Angular conferences and meetups to learn more and promote their brand as a place to be for skilled and ambitious Angular developers. NG Poland is the biggest Angular conference in the CEE region.

Self-organized conferences and meetups require even more preparation than online webinars, but they can also help you stand out more and even create a community of developers centered around your own event. It’s a fantastic way to present your company as a go-to place for Angular developers as well as approach potential candidates directly. The Software House has talked about Angular as well as about many other technologies during its own series of meetups: Uszanowanko Programowanko, which takes place in our home city of Gliwice.

Want to contact developers directly online? A good (and legal) way to do it is to use career-focused social media platforms such as LinkedIn. The Microsoft-owned platform offers premium services for recruiters to use many advanced filters in their search. Some of them include Quoted Search (exact matches using quotes), Boolean search (with AND/NOT/OR operators), or Parenthetical Search (for complex keyword requests).

How to find Angular developer – tools

There are also many online tools and services that you can use to fine-tune your search for Angular developers:

You can use them to test the skills of the Angular developers you are interested in. It can be a part of the recruitment process. Devskiller or Codility are commonly used.

These tools can give you access to a wider pool of talents as well as various means to filter them in order to find the best matches. Amazing Hiring or Intelligence Search are good examples of those.

They are used to keep track of all candidates. Organizing this data really helps in the long term. If you want to find some, search for programs that belong to the Applicant Tracking System (ATS) class.

How to find Angular developer – outsourcing

As you can see, there are many strategies and tools that you can use to increase your chances of finding Angular developers and then picking the cream of the crop. However, a lot of these strategies take time to bear fruit. Establishing your company as a great place to work for Angular developers is worth doing, but it requires a long-term strategy.

What if you want to hire great full-time Angular developers for your web application here and now? Angular outsourcing is something you might consider. Top-of-the-line software houses have experienced and talented Angular developers ready to start working on your project at any time. You also gain the flexibility of outsourcing, which allows you to increase and decrease the number of Angular devs you hire very quickly, in response to your needs and financial/market situation.

What are typical scenarios when Angular outsourcing can prove the most efficient solution? 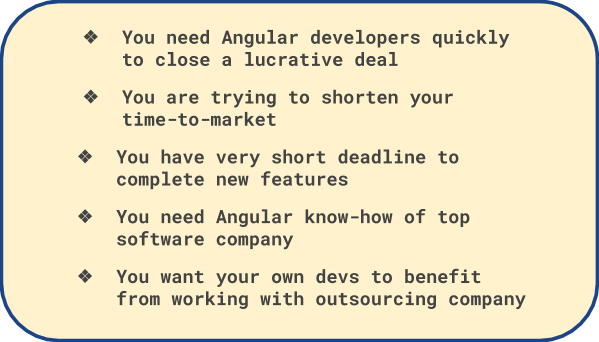 What do you think – are you now ready to find Angular developers that your company needs? Are the strategies and tools listed in the article feasible in your situation? Whatever option you’re going to choose, remember that:

And you can also always take advantage of Angular development offered by The Software House. Contact us and let’s talk about your next exciting web application project!