Nordic outsourcing & IT – why are Nordic countries investing in outsourcing? 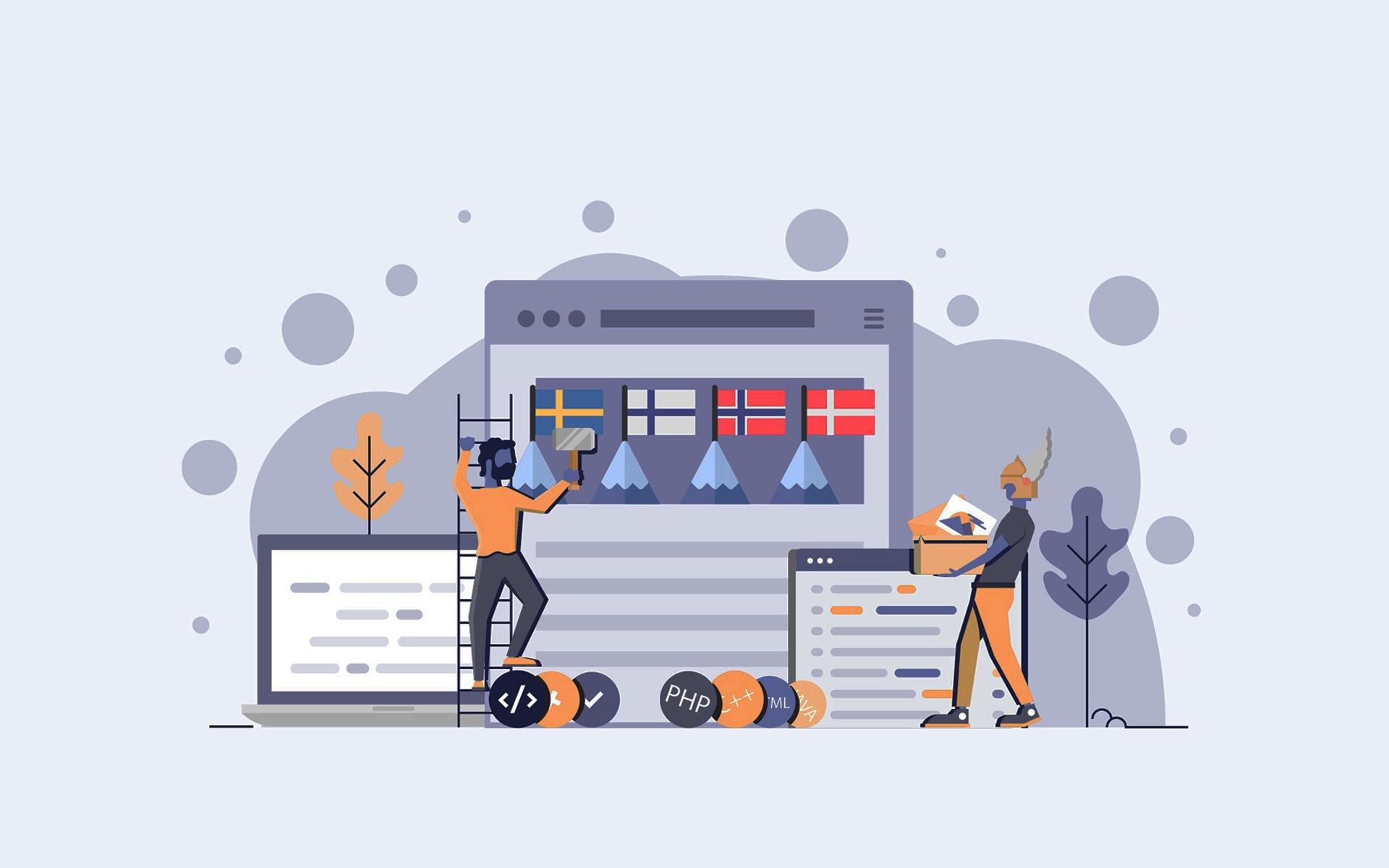 In the last few years, Norway, Denmark, Sweden and Finland became true technological powerhouses. However, such success comes with a price: software developer salaries in the Nordics are skyrocketing and it’s getting really hard to find a new employee. This is the reason why more and more companies choose IT outsourcing – but this outsourcing looks quite different than a few years ago…

Nordic IT market in 2018/2019 and reasons for outsourcing

The technological advancement of the Nordic region isn’t something to argue about. In the last edition of the Digital Evolution Index, 4 out of 5 top places were taken by Norway, Denmark, Sweden and Finland. And it’s not only because of the multi-billion dollar companies like Spotify. Small and medium-sized enterprises representing various branches are also investing in new technologies, developing web and mobile apps to enhance their client base.

Technological progress results in a significant inflow of capital but, as Daxx puts it, “With more investments fueling the market growth, the demand for software developers will grow.”

And it’s already a problem for the Nordic companies. Among all the countries in the Hays Global Skill Index 2017, Sweden has the highest level of labour market stress. And Denmark, which was in a slightly better situation year before, is almost catching up now. What does it mean exactly? The biggest problem for both countries is the so-called talent mismatch. To quote the report, “businesses face serious difficulty in matching available talent with unfilled jobs”.

It’s especially visible on the software development market. Danish government predicts that the country will come short of 19,000 IT specialists by 2030 and, according to the Finnish Information Processing Association, Finland will be lacking 15,000 IT engineers by 2020. Of course, it’s good news for the software developers, as they can demand more from their employers, not only in terms of salary but also additional benefits and work-life balance. The rising demands of software engineers can be satisfied by global tech moguls, like Microsoft, IBM and Uber, which are currently expanding in the Nordics. But what about smaller players?

Without the proper workforce, small and medium enterprises won’t be able to scale up their businesses.

They can, of course, wait for governments to improve the education system, but it’s a process that will take at least a few years. It’s also possible to create training programmes and, for example, teach immigrants to code. In fact, as Daxx informs in its report, some companies, like Integrify, have already started such projects. Unfortunately, this way you can only fill junior-level positions (and it still takes a few months).

All in all, more and more Nordic companies realise that, in the present situation, the best decision is to outsource. Lucky for them, the world of outsourcing has recently changed a lot. Changed for the better.

IT outsourcing destinations and trends

Of course, Nordic companies are not new to outsourcing. Back in 2015, Eeva Haaramo from Computer Weekly announced in her article that “Indian outsourcing is booming in the Nordics”. And she was right, as even the biggest enterprises decided to hire remote workers from India – just like the Norwegian DNB bank which sealed a seven-year deal with HCL Technologies. However, the situation has changed since then and in 2017, when writing again about outsourcing in the Nordics, Haaramo noticed that:

“Although Indian providers remain prominent on the list, their success in the Nordic market showed signs of wavering, with several falling in the rankings.”

Why exactly? Because a new opportunity appeared. Nordic companies have recently realised that, instead of employing remote workers from offshore countries like India, they can outsource to their neighbours in Central and Eastern Europe – and this is pretty much the definition of “nearshoring”. Why is it such a hot topic recently? What are the benefits of nearshoring? Many experts talk about geographic proximity: when outsourcing to Poland or Ukraine, you don’t need to google “time difference between…” every other day, as the difference is 1 hour or nothing at all.

Other outsourcing experts focus not only on geographical but also on more elusive aspects – according to them, it’s easier to work with people when there are cultural, social and political linkages.

This is all true, but when it comes to software outsourcing, there are things that matter even more than geographic or cultural proximity. The most important one, which you want to check before starting any collaboration in the IT world, is the technical proficiency of the developers. Fortunately, thanks to the magic of the internet, we can compare IT engineers from various countries. And, according to the extensive report by Hacker Rank, developers from CEE are among the very best ones, with Poland securing the 3rd place – outscoring not only India but also the United States, Japan and all of the Nordic countries.

However, everyone who has worked in IT for some time knows that high-quality code is not enough. Following the principles of agile software development, you want to contact the remote development team almost on a daily basis. And to do that, you need them to be communicative and to know English very well. It’s especially important for Nordic companies, as Sweden, Denmark, Norway and Finland are among the very best English-speaking countries in the world, according to the EF English Proficiency Index ranking. And this is why Nordic companies want to outsource to Central and Eastern Europe – in the English Proficiency Index ranking, Poland secures the 11th place in the world. Just to compare, India is 27th and China 36th.

The most cost-effective choice in software development outsourcing

All in all, the nearshoring revolution brought IT outsourcing to the next level. 5 or 10 years ago, software companies outsourced their processes when they needed simple, straightforward body leasing. A fairly easy, repetitive job was done by remote workers while the most important lines of code were still written in-house. Nowadays, as Nordic countries experience lack of software engineers on the market, things are different.

Simple body leasing is not enough. When outsourcing, modern software companies need complete teams of IT experts which can understand their business and perform the tasks at least as good as the local developers.

And it’s nearshoring that seems to satisfy these expectations. But, at this point, we must ask ourselves one more question: what about the money? If the developers in CEE write top-quality code and, at the same time, have very good soft skills, their services must cost a lot, right? When compared to India or China – yes. But for Nordic companies, they are still a bargain. As explained by Andrada Fiscutean from ZDNet: “Although Eastern Europe doesn’t offer costs that are as low as those found in India or China, (…) it can argue that it provides better product quality, a proximity to Western Europe, cultural affinity, a better business environment, and high-level skills.”

Let’s talk numbers. Recently, Daxx has prepared an up-to-date list of average software developer salaries. In Norway and Denmark, it’s circa $70,000 (or €60,000) per year, in Sweden and in Finland – respectively $53,000 (€45,000) and $47,000 (€40,000). When we look at the data gathered by PayScale, the numbers are almost identical. And the conclusion is the same: all four countries are among the highest paying in the world. What about Central and Eastern Europe?

Average software developer in Poland earns $24,000 (€20,000) per year. Therefore, it’s half the salary of a Finnish developer and one-third of a Norwegian developer’s paycheck.

Finding the best IT outsourcing companies

With the average number of working hours, as well as the total paid leave, being almost the same for all aforementioned countries, you must realise one thing: Nordic companies which decided to outsource to CEE simply did their math. You can get a team of world-class developers and pay for them the fraction of what you used to pay locally. Too good to be true? Well, many people still think so. Some are worried that they will lose control over the remote team. Others don’t believe that outsourcing can be a long-term solution.

But you know what’s best?

Everything checked? Then open up a new email window and start writing an enquiry. It seems that you may be the next Nordic entrepreneur wishing to benefit from nearshoring.

Still looking for your optimal choice in outsourcing?

Schedule free consultations and try nearshoring with The Software House from Poland.