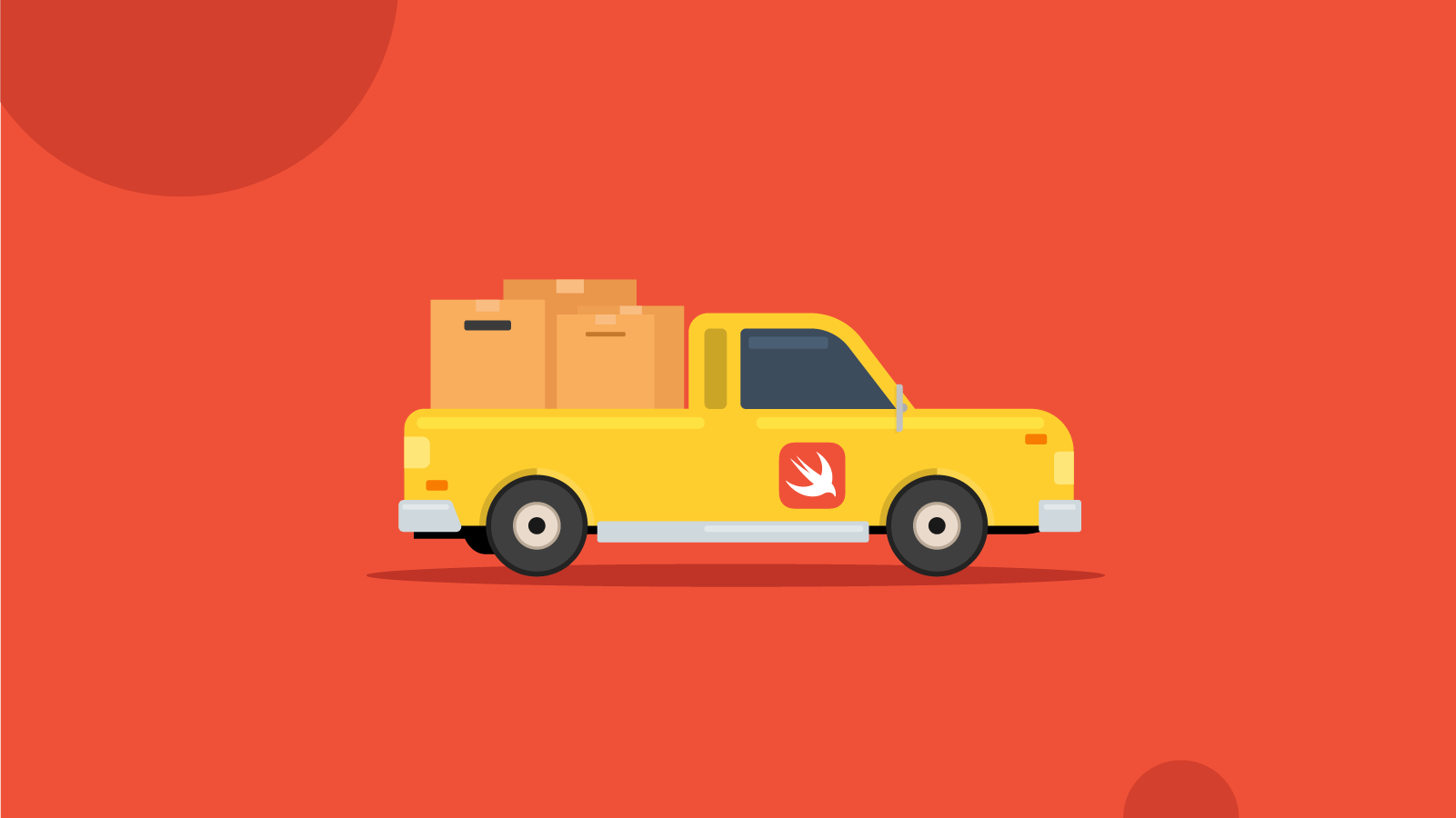 Are you interested in learning more about the latest powerful features of Swift Package Manager? Before you keep on reading, make sure you are already familiar with the 1st part of my SPM guide.

In this part, I’m going to:

This scenario works for parts of code you want to wrap into a (Swift) package and separate from the project. It’s not a separate reusable library yet, though. This approach has a couple of benefits:

A package like this will surely change a lot as the app grows. That’s why I think it’s better to version the code of this module together with the whole app.

Back to our example. Let’s say that I want all the network-related code to be separated as a new module. In order to do this, I’m creating a NetworkStack package. I’m planning to use it only to share simple methods for getting insurance quotes via a public API. Details such as endpoint routes, response serialization etc. will remain hidden in the module.

Before you delve deeper into Swift Package Manager, make sure you are familiar with all the basic terms I’m going to use here. Some of the key concepts include modules, packages, products and dependencies.

Before Xcode 11, you could create SPM packages by running a command (the library type is default, the other being the executable type):

By default, the init command creates the structure for the library package.

It’s worth it to note that:

Adding a package to the project

The workspace now includes InsuranceApp and the NetworkStack module. To use the newly-created library in the app’s code, I need to add it to the main target (in the General tab of InsuranceApp’s target). Note that I’m choosing the 🏛️NetworkStack product rather than the 📦NetworkStack package.

🥳 Voilà! Now, the app has access to all the public features of the NetworkStack library.

🔎 Show me what you’ve got inside

So far so good. The next step is to add something of value to the newly-created module. The structure of the package’s catalog is clearly defined. 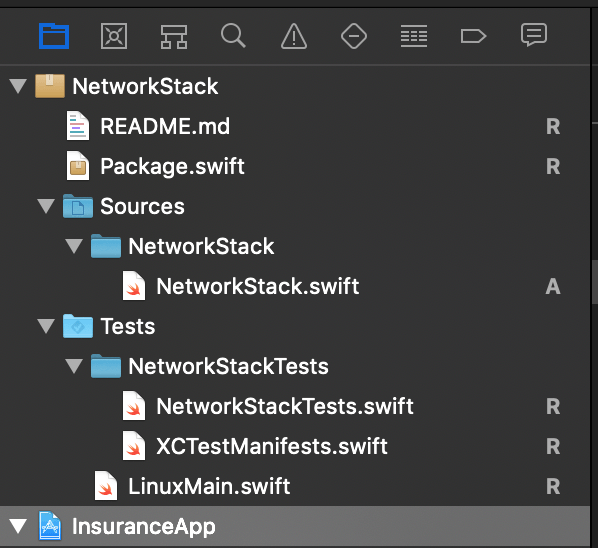 📂 Tests/NetworkStackTests is for all the tests,

📝 .gitignore – SPM makes it quite useful
Let’s start with the Package.swift manifest file.

Isn’t it great that you can write the manifest of a Swift package in Swift?

“The manifest file, or package manifest, defines the package’s name and its contents using the PackageDescription module. A package has one or more targets. Each target specifies a product and may declare one or more dependencies.”

You can read more about the manifest file in the Swift Package Manager’s documentation. Full documentation of API PackageDescription is available here on GitHub.

Adding dependencies to the module

Since the NetworkStack module will keep me busy enough, I’m going to make things a bit easier by using the Alamofire library.

In order to add this dependency to the package, you need to:

And that’s it! I know, I keep repeating myself, but I’m really amazed at how much easier things can be with Swift Package Manager. With just this, version 5.0.0-rc.2 of Alamofire appeared on the list of Swift Package Dependencies in Project Navigator. Just like that.

However, when I try to build my project, I get an error:

❗The package product ‘Alamofire’ requires minimum platform version 10.0 for the iOS platform, but this target supports 8.0.

Adding an entry to support iOS 10 and higher resolves the issue – the project builds without any errors. For more details about struct SupportedPlatform, head over to the Swift Package Manager documentation.

Let’s get something real done

How exactly can a module like this be useful in a project? I’m going to show it by adding a public method, which fetches a list of insurance advisors.

In the main ViewController of the app (I know… but this is not an article about app architecture 🙂 ), I’m importing the NetworkStack library and download the list of insurance advisors. Done.

By moving all the code responsible for network requests to a new module, the project has become much clearer. The new namespace allows me to encapsulate many structures and operations. It usually is not a good idea to use models that map 1:1 with the API responses  (as a matter of fact, I can’t think of a good scenario for this…), so I could extend the NetworkStack package with mapping to public models, which only include necessary data in specific formats (dates, URLs etc.).

Declaring private Endpoint enum in the module inside guarantees that making additional requests that do not go through the NetworkStack layer will simply be impossible (without very strong effort, of course!)

And now the best part! I decided to share this extremely useful, well-thought-out and thoroughly tested library with another team. Can Swift Package Manager handle that?

Publishing some code that has been a separate module from the start is far more straightforward than trying to extract a piece of the project’s codebase created in the main target, even if it is conceptually separate. The latter scenario requires tons of self-control and experience in order to maintain a good level of concern separation. Besides, this extracted code will have to be wrapped into some kind of package/library anyway, so it’s much better to do it from the start.

What exactly should you do to publish a package? There are a couple steps to it:

You can now import the internally-developed library by going to File -> Swift Packages -> Add Package Dependency… Read the first part to learn more on that, but you know what it means 😈 ♾️, it may be wiser to keep on reading for now👇

Boris Buegling has talked about Creating Swift Packages during this year’s WWDC (ca. 8:00). He includes adding content to README and writing tests. I skipped it since it would only complicate the process, while the library’s code should already have solid test coverage (I already used it in the app after all).

A package in the edit mode

You thought we’re done? Not even close! SPM still has a killer feature up its sleeve! 😄 I’m going to show you how you can edit the source code of your project’s packages in the very same Xcode window.

Let’s get back to the InsuranceCalculator library. Let’s say I need to make a change in how it calculates premiums. First, I want to do this locally and see how the update works in the iOS app, and then I want to update the library so that the macOS app gets it too.

In order to change the reference to InsuranceCalculator for a local version, I need to:

And that’s pretty much it.

How to run tests

I’m launching the tests in the Terminal using the swift test command (while inside the catalog that includes the InsuranceCalculator package, of course).

The newly-updated calculatePremiums method is automatically available in the main project. No need for any further configuration. I can now calculate premiums, taking into consideration the renewal discount. 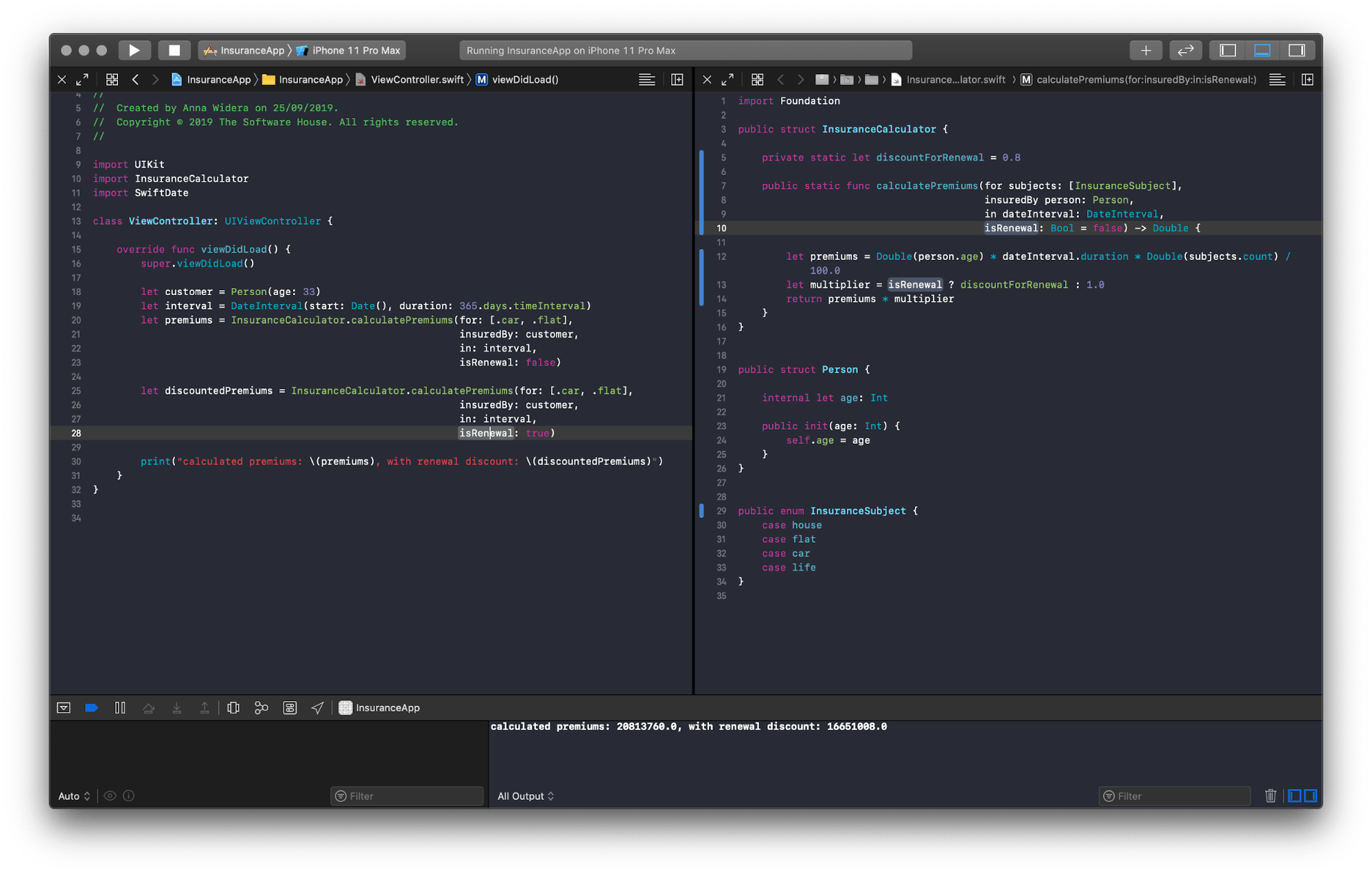 The next step is to update the InsuranceCalculator library in the repository. I can commit all changes and bump the version to 1.1.0 (tagging the master branch) using Xcode’s Source Control interface. Once pushed, the new version is made accessible to all teams. In order to switch back to InsuranceCalculator from the repository, all I need to do is… remove the reference to the local version.

Note that InsuranceCalculator can again be found in the Swift Package Dependencies section, but this time its in the 1.1.0 version. SPM has fetched the latest version of the dependency in the 1.0.0 < 2.0.0 range.

⚙️ Cloning on a different machine

As I already said, I saved the best for last. So here is another killer feature.

Let’s say a new team member is getting into the project. They clone the repository to their local drive. They click CMD+R. And the magic begins.

Swift Project Manager is sorting out all the dependencies and their versions (sometimes with the help of the InsuranceApp.xcworkspace/xcshareddata/swiftpm/Package.resolved file, provided it’s present in the repository), fetching and checking them out. Next, Xcode is building the project, adding all the required libraries in the process. No extra commands, no need to configure any paths. Everything simply works as it’s supposed to.  🙇

For me, this series of articles is a way to express my admiration and gratitude for the new and improved Swift Package Manager, which now supports all platforms within the Apple ecosystem and easily integrates with Xcode 11. In this part, I focused on creating, maintaining and distribution of your own packages. It’s another big benefit of using SPM, since the easier it is to build and maintain a modular app, the easier it is to invest your time and effort in making one. I really hope that it will all translate into much clearer and pleasant codebases you gladly return to months or even years later. 🤞Also, if you want to learn even more about trends in Swift, make sure to read my previous article on protocol-oriented programming in Swift.