2021 study: How effective is outsourcing developers to Europe? 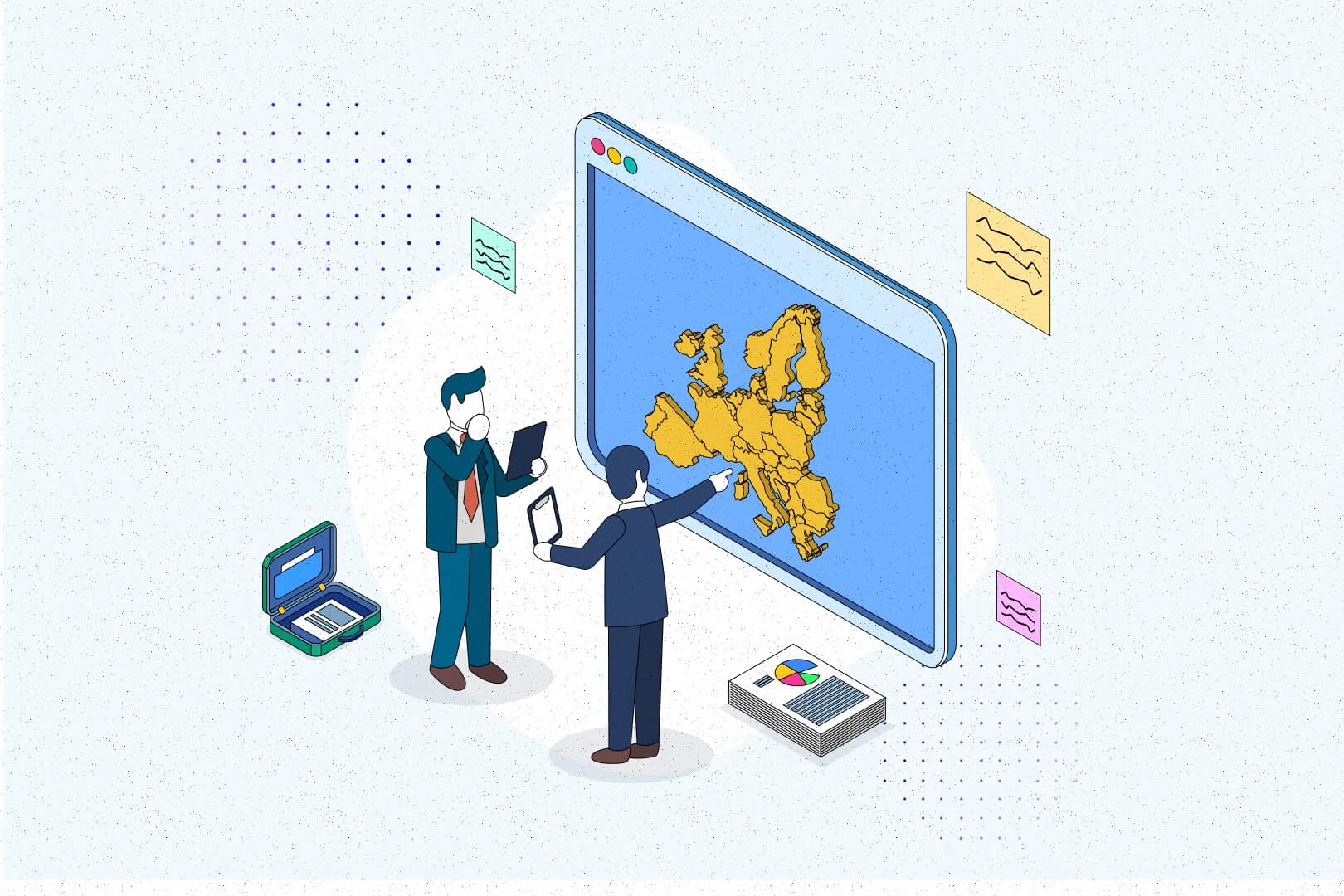 The development plan is still scattered across emails, notes, minds. You’re sure your software project will drag on without a top gun development team, and the management is eagerly awaiting results. Someone from your network recommended Europe as a hotspot for ITO works, but is it, really? What metrics should you verify before investing your tight budget? Explore the must-know facts that will help you estimate the success of outsourced development done on the Old Continent as compared with the Americas, MENA, the Far East, and the Asia-Pacific.

You know this must be a sound decision. Expanding in-house talent is a daring responsibility, as a software development project of 3 to +9 months calls for a lot of commitment. Failure is not an option — maybe there’s already a contract you follow — but there’s no open-book source that measures ITO (information technology outsourcing) project success by region or country. It means you need to get creative to place your bet. As you know that ease of communication must guide the final choice of a partner (consider our PM’s essay on remote team communication culture), it’s time for a checkup of study-based data sources in our search for a hi-stakes outsourcing team.

You might have a list of countries you’re unsure of, or maybe you’re still wondering about pushing the development to China, India or the Philippines. When Googling about, you’ll find a lot of “top” rankings for software development countries. The mirage dissolves when you click through and see that many authors rarely link their choice to any credible source. To save you around 7 hours of caffeine-fueled research, your friends here prepared a mini-business study you perhaps will like to forward to stakeholders.

Here are the sources main we’ll consider while establishing the “effective” factor:

To see where most contracts go.

That’s the answer to how software teams look like in key ITO regions.

Ranking total skill in the most prominent technologies.

Find out where the most active software developers come from.

Why this set of data? Because it’s based on the volume of total sales + registered developer proficiency, which are the two factors to consider when making sound business decisions (ask your CFO). You can feed your mind with statistics, but they’re only nutritious for logic if they’re comparable and measured in time, which is what this selection of reports delivers.

Where do businesses outsource projects to?

Statista — a website aggregator of 25,000 data points — suggests that in 9 years since 2010, EMEA (Europe, Middle East, Africa) attracted $85B (or 8.4%) more in outsourcing revenue than the Americas. This is because, by the law of currency value, the west always outsources to the east. Take a look below:

There’s a lot of numbers plastered here, but no worries. What that means is:

What defines the European business environment

Europe doesn’t survive on taxing alone, mind you. The Old Continent has been a reliable trade partner for the United States and China for decades as one of the biggest combined economies worldwide. There’s an established network of headquarters for key enterprises here connected to both East and West. Through them, industry trends, work processes, and software development norms spread into the majority of European countries, where most professionals strive to develop a skill set that reflects top market requirements:

Facts suggest that an American, Canadian, or European won’t struggle much with successful software outsourcing in Europe and its closest regions. That we can also assume by counting the number of well-funded startups centered here, such as Klarna, Deezer, or Trustpilot.

Which apps can you build with success by outsourcing? Browse examples in our collection described by challenge, solution, effect, and metrics.

How steady is software outsourcing post-pandemic?

You should evaluate each potential software house individually, as predictions show all regions limited business operations in 2020. Still, some places remain ready for work with limited spending, while others had to scale back on financing technology development, which may lead to lower partner availability.

The case for European software outsourcing remains strong despite the market disruption. In both Europe and America, Covid might not have disrupted the field of technology, as most businesses surveyed in both regions hold their IT budgets for 2021 to prevent any roadblocks for software development operations. That may mean their clientele has not changed dramatically, and the workload is comparable to mid-2020.

Now, compare Europe and America in 2020 with the rest of the world. Asia-Pacific countries, Japan, the Middle East, and Africa had the greatest budget cuts, so their software development services might be offered at a limited capacity right now. It’s not all bleak — Latin American businesses increased their IT budgets in preparation for nearshoring support for North America, and China keeps its spending high as a low-cost software development spot.

How does Europe compare in software development outsourcing?

I’m forwarding your question to ISG, a Nasdaq-listed technology advisor that has been running quarterly market studies since the pre-Instagram era (guess the year). Their data sourced from around 20 countries reveals the EMEA region seconds behind the Americas in annual contract value of internet technology outsourcing (ITO) services. That term in large covers sales of hardware, digital infrastructure, and web and mobile software development work.

Studies done by SourceSeek reveal that, on average, Eastern European software companies have a development team of 48. That’s the fourth spot just behind top growth regions. North America holds the podium with 80 developers, followed by the Middle-East (51), and Asia (50). While the U.S. and Canada remain the combined tech kingdom also in this category, you can expect a comparable number of developers per project when looking into Europe and Asia — the two most talked about places for outsourcing software works.

Of course, teams vary because of their technology preference. Your JavaScript projects might have better luck in Eastern Europe or South America than other regions, and while you can find specialized PHP and MySQL developers in nearly every corner of the planet, Middle Eastern and South Asian software houses should be best equipped to handle them.

Study the chart below to see where to knock with your next big thing:

From Eastern Europe alone, you can expect software development houses proficient projects combining most in-demand JavaScript frontend frameworks (like React or Vue) with Java or PHP for the backend. When considering your choice of an outsourcing partner, remember that many European companies have their online tech radar accessible for your review. You can examine The Software House’s tech radar freely. Maybe it’s a click-match?

Regions ranked as effective in technology

Nations have their character that defines their mastery in technology works. What’s the latest intel on software developer proficiency then? That’s what Coursera answers in their recently released 2020 Global Index report. Sure, there are developer rankings from talent platforms, but Coursera’s study is worth considering, as they remain in partnership with over 200 universities (including Yale, Duke, and the Imperial College of London), which probably advised them on the methodology.

Experience the unexpected. That’s no joke — even I’m surprised. According to Coursera,  Western, Central, and Eastern European developers lead the charts for “cutting-edge” technology proficiency by  98%. The top 15 gang includes countries such as (descending) Belarus, Switzerland, Ukraine, Finland, and the Netherlands. Poland — where we’re from — is still among them. It’s like a birthday gift. So who takes the 2% that’s left? It’s a spot for Russia which ranked no 1 in this edition — the only Eurasian country in this segment. 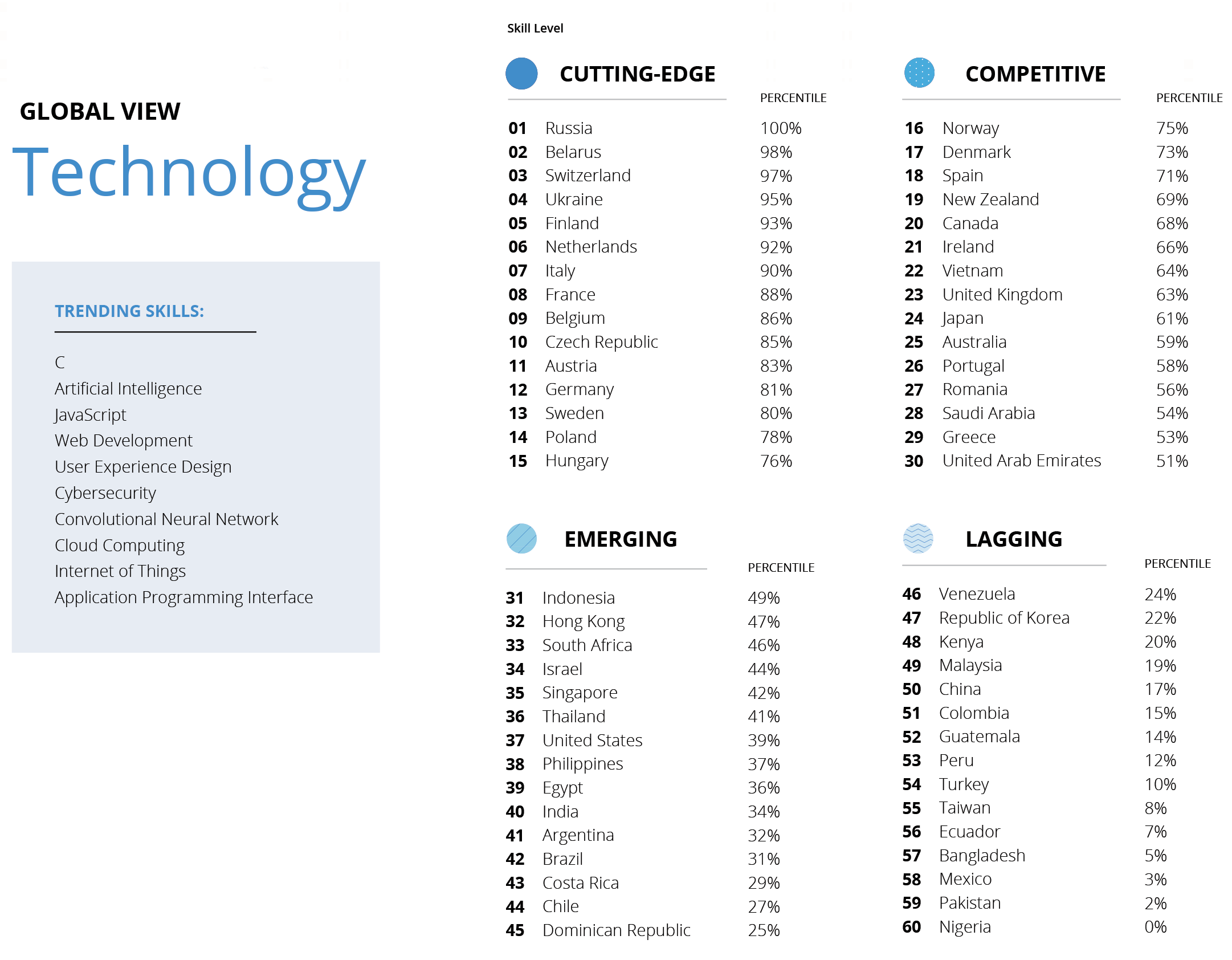 Europe is still dominating by 53% in the “Competitive” group (that counts Norway, Denmark, Spain or UK), with an even 13% split for Asia-Pacific (Vietnam and Japan), the Middle East (Saudi Arabia; United Arab Emirates), and Oceania (New Zealand and Australia). Canada stands alone for North America, ranking relatively high at no 20.

Developers from emerging countries — ranked as 26-50% proficient — come from the Asia-Pacific (40%), followed by the Middle East, the isolated U.S. for North America, and South Africa as the only country from the continent.

In terms of the regions that are “lagging”, we’ll let you skim through the list for yourself. Remember that Coursera’s scoreboard might be a somewhat accurate evaluation, but it shouldn’t be considered as a definite list of outsourcing spots to avoid. There are really good teams with a hands-on attitude all over if you look hard enough under every rock.

Have you considered GitHub’s statistics? It has a reported 88% market share as a source code management platform, which means many of the world’s software developers rely on it daily. Github’s recent report is worth looking into, as it’s based on a packed volume of +60M repository contributions from 2020. In your hunt for a software development partner, you might want to know that European coders are the third most active contributors, with North America and Asia in the lead of the tech race.

If you made it so far, you have nerves of steel or a praise-worthy determination. We covered a lot of ground, so you deserve a reward — here’s a brief checklist that will help you use the data you (tried to) read to outsource software development with success. If you’re really careful about entering a new, digital project, this will let you make an educated guesstimate.

1. Know if the business is from an outsourcing growth area

2. Confirm if the region profits in the services you need

ITO (mostly web and mobile development) and SaaS services (may it be platforms or databases) have similar demand in the Americas and EMEA. But if you’re managing an IaaS project (involving Amazon AWS or Microsoft Azure), then Asia-Pacific might offer you more proficient development teams to invest in, as the region goes head-to-head with EMEA.

See how good your potential partners are in handling technology fundamentals. The ranking provides a joint score for skills in C, AI, JavaScript, Web Development, UX Design, Cybersecurity, and more.

Honestly, it would be wise to follow a recommendation from a tech fellow. If you, however, find yourself short on trustworthy advice, know that Clutch runs rankings of best-reviewed software outsourcing companies per country. Toptal and Aciety are also recognized websites you can investigate.

With LinkedIn — that espionage tool you have — you can investigate if a software house that’s on your mind has a well-rounded development team. Compare it with your structure. Some of the people there might be in your future outsourced team, and they need to fill the gaps in your talent. Are there enough Senior Engineers? How about their UX squad?

6. Check that stack on the tech radar

What developers use daily often remains a trade-secret locked in a bunker. So if you find a partner with an open tech radar, consider that a sign of good-will (because they want to find a tech match) and transparency (as it’s still valuable know-how).

You are now better prepared to ride along with the right outsourcing partner. Best of luck in finding a development team you can really roll with day by day. If you found this research helpful, share it with your CTO or Product Lead colleagues who appreciate transparent data research.

Get the roadmap to software development outsourcing 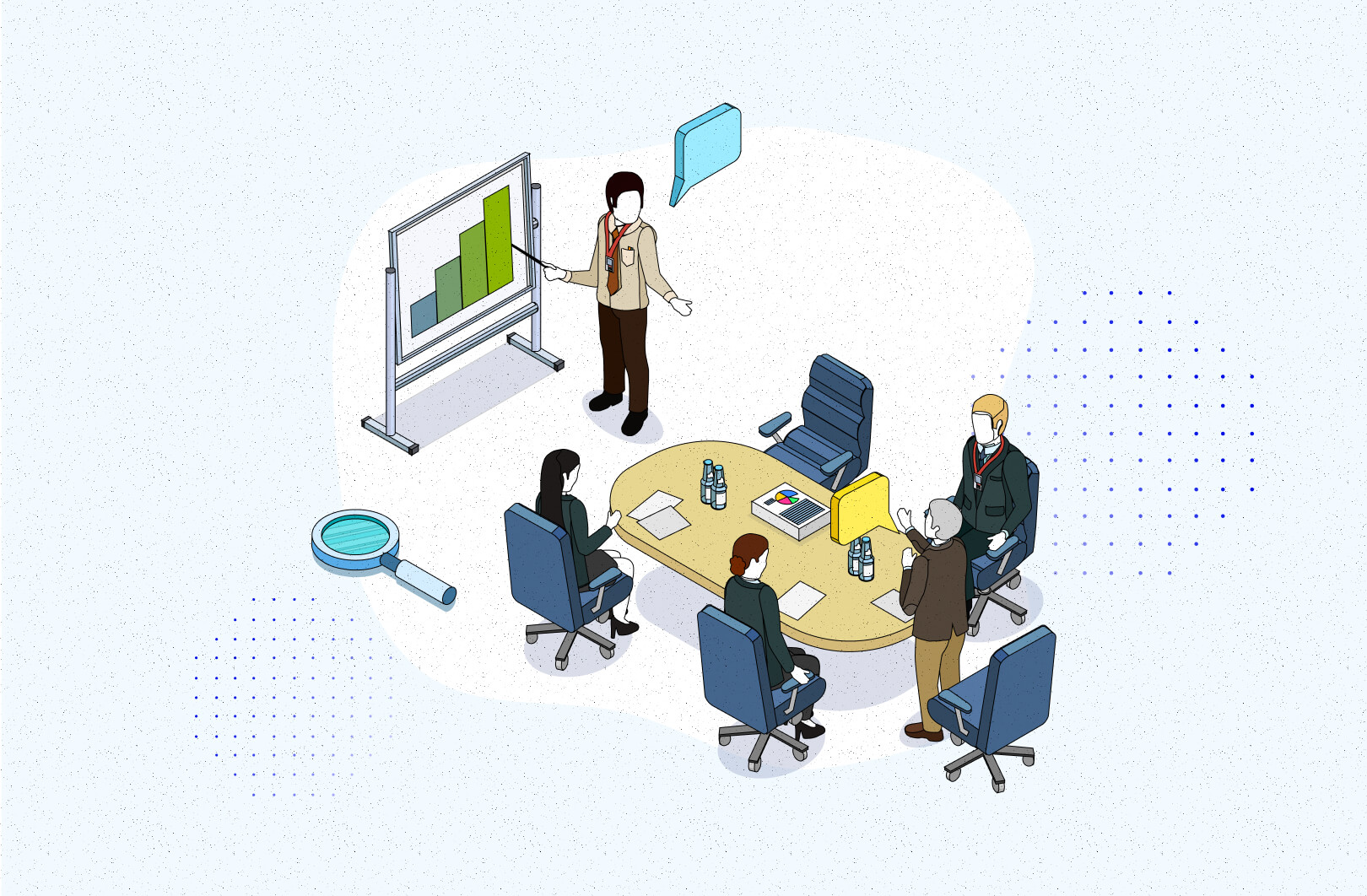